A constant as a letter

. The reduced Planck constant, or Dirac constant, equal to the constant divided by

. So if we visualize the letter

in the context of quantum physics, it is good enough.  Logical markers usually appear in specific colors and fonts. For me,

is usually visualized as a shining golden semi-transparent letter, because it was derived from the black body radiation problem.

Mathematical constants do not have units. Pi is 3.14159… and e is 2.71828. Three digits and an exponent are usually enough to represent a constant. We usually do not need more accuracy to see that we did not make a serious mistake. Computers will probably use 64 bits representations – much more than we will ever need. Remembering 6 digits is a bonus. A regular memory structure used for remembering numbers, like PAO or musical dual-coding will probably be fine-tuned to 6 digits. Quite often due to peculiarities of memory systems, it is easier to visualize and memorize 6 digits sequences – so there is really no need to truncate the number, especially if there is no exponent to memorize.

It makes sense to dual-code constants. Some of our mental math is visual, but some of it is logical. If we dual code the values we use, we can choose the representation minimizing mental load and context switching.

There are many representations to choose from:

These methods are profoundly different, and it makes sense to use all representations for useful constants.

Since the unit conversion is not trivial, and there is no standard letter, I use separate representations. A plane breaking the sound barrier for km/h and a running shouting boy for m/sec. Curiously, these are the visualizations I made when I was 10 years old, and I found no need to change them. I did not even event them: they were in my textbook.

Memorizing units can be painful. The Plank constant hbar is measured in Joules per second or in electron volts per second with very different values. 1.05×10−34 J⋅s or 6.58×10−16 eV⋅s. Typically I disambiguate by using a different visualization. For eV representation, by adding a subscript to the value: hbar_eV or hbar_J.

Then there is the meaning of the constant: energy multiplied by frequency. I remember this via Bohr model 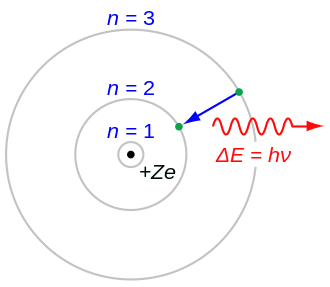 As I proceed to the number, the order of magnitude contains signs and two digits. The sign may be encoded via the color of visualization. To be honest, if I can between pico and Tera, I do not encode the magnitude as a direct number but use engineering notation instead, effectively encoding a letter.

Constants are usually meaningful only in the context of some basic problems they solve. These problems can deal with the convergence of series, mathematical models, or something else. Quite often I understand the true power of a constant years after learning it. For example, I learned Euler number  e at school

However only at the university, I started to use it for harmonic functions

By the way, this Euler identity is probably the most beautiful mathematical formula.

I honestly try to remember the mathematical meaning as a visualized formula on a scroll, and I also use dual coding. To raise my own interest I read some history – otherwise, science would be boring.

Euler had one bad eye and was called “cyclops” by his peers. Then he started to lose sight in his second eye. The cataract operation was pretty standard in his time, yet his operation was a disaster. He lost sight and created his best mathematical works in total blindness, dictating a scientific article per week to his secretary.

where A is the area of the event horizon, c is the speed of light, and k, G, and ℏ are the Boltzmann, gravitational, and reduced Planck constants, respectively.

Boltzmann constant k has many representations. Thermodynamics starts with the ideal gas law, yet I like the natural units energy = temperature * k as this immediately focuses on the measurement units.

Other constants are just like they are described. Gravitation is the pull between two masses over a distance (earth and sun). The speed of light is usually visualized as the blooming of a star.

Not always we can easily remember the number itself. Sometimes we are better off memorizing the upper and the lower boundary, or some other approximation. For example, there are approximately pi * (10^7) seconds in a year and slightly less than e*(10^6) seconds per month. These approximations are not mathematical. A common year has 31,536,000 seconds. January has 2,678,400 seconds, and common (28 days) February has 2,419,200 seconds. Simply e and pi are nice numbers, and to get the order of magnitude they are good enough.

There are people who remember pi with extraordinary accuracy. Who cares, except the records committee? There are so many constants and formulas to remember. And then, each number behaves a little differently in a different context, generating more scenarios. It is better to remember more constants with reasonably low accuracy than remember very few constants with extraordinary accuracy. The final computation is done by computer in any case. There is very little motivation to remember more than two digits and an exponent in each case.

To remember constants and variables better, we often make them less abstract. They were derived from real people with real problems, who tried to model real situations. If the result was anything but beautiful we would not be even asked to remember. If we are asked to remember, it is easy to learn about the people and the models they used and to make some emotional connection. This also helps memorization.