Visual illusions use the automatic mechanisms of the brain to create something that is not there or create multiple alternative re.presentations. Sometimes life itself feels like the greatest illusion of them all. By changing the perspective, we can understand some illusions better. What can we learn from this? For today’s reading, the links are here, here, here, here, here, here, and here.

Why are we captivated by illusions?

There is something hypnotic in optical illusions. We know that something is not there but we see it there. We understand that what we see cannot be true. The more we look at it, the more vivid is the image we see. And we look more to see the hidden clues for the illusion.

Illusions are usually generated by our automatic systems.  Our brain is used to gradient light, so it automatically corrects the illumination even if we do not want to. We are so used to see things in perspective, that the brain interprets perspectives everywhere. From partial representations of an object, we are used to creating the entire object, but suddenly different parts of the object do not work well together…

I quote: Optical illusions, or visual illusions, are defined by “the dissociation between the physical reality and the subjective perception of an object or event.” Illusions tend to induce trans-like sense of desensitization. They can relieve arthritis pain and even amputation pain.

Here you can find an explanation of several popular illusions with some of the relevant history. The illusions work quite well when we look at the two-dimensional screen without depth cues and external illumination. Around the world, there are several museums with “Illusion rooms”. Once you enter the room, you understand the mechanism involved. Then you take a picture and see a familiar illusion. Illusions do not work well in a 3D world.

Magic tricks happen to work in our reality because the magicians usually introduce the dimension of time. Our ability to judge obscured objects and volumes of cubes is limited. Enough so to allow the addition of tricky devices. On the other hand, card tricks typically utilize our focus on moving objects: magicians show you one thing while he changes another.  Most magic tricks are well-explained on-line. Just ask the right questions in your search engine. Once we understand the nature of each trick, we lose some of our innocence. Do you want that?

Perspectives of the magic show

In a magic trick, there are several perspectives or archetypes.

All the figures in the performance are locked in a sort of dance that creates the show. Without the magician, there would be no show. Assistants allow more complex tricks and preserve magician from going too far. The magician pushes himself not for the naive audience, but for the informed visitors. The audience adds an atmosphere of joy and mystification: without it, we would get something like professional sports.

Most tricks tend to be simple, yet require dexterity and showmanship. Even when the informed visitor understands the mirrors in the room, he should not see them.

There are math tricks, which can work only because somewhere a number is divided by zero, yet the trick is so complex that we do not see it.

Step out of the box

We all are trained to step out of the box, yet we are trained in some specific context. For example, we might think about trap doors that do not exist but fail to notice that the box itself is large enough to hide the assistant. The constant motion and shift of attention help to disorient us.

In some other example, we may be shown one object solid and strong, yet the magician uses another object that only appears the same. The audience will look for hidden marks within the object but in truth, totally another object was used. We simply assume that if there is one sufficiently unique object, there is no another similarly looking object. Alternatively, we may miss the agility with which the objects replace each other.

People are much worse in “open space” creativity than they think. Most creative solutions are generated within “the box”. Very creative people usually do not step out of the box, but use instead systematic problem-solving techniques.

Does the magician think “out of the box”? Not likely. A good magician knows enough techniques to confuse even other magicians. He mixes and matches from multiple techniques he knows.

Let us again reduce the dimensionality of this discussion. This tends to simplify the analysis.

Taking photos of the same event from multiple perspectives, photographers can tell different stories. We tend to associate ourselves with the person in the center of the photo in focus and his story. Other participants and their body language is out-of-focus or partially obscured. As we focus on THAT person, the story changes.

Rorschach test allows everyone to see what he wants in an abstract stain. If there are preconditioned ideas, we will try to see the justification for them. Social events are kind of the same, but once the camera focuses on their hero, other stories become less important.

AI can spot photoshopped photos often better than humans, but another AI can be trained to fool it. A skilled photographer does not change the image itself to manipulate the story: he chooses angle and timing.

The best photographers are patient enough and skilled enough to wait years for the perfect shot, and once the perfect opportunity appears not to miss it. I know that this skill can be trained. Every successful hunter spends years training to acquire stealth, patience, and technical accuracy. Photographers hunt images and do not kill living beings, but the skillset and gamification appear to be similar.

There are several storytelling formulas that always work. They work because they describe archetypical situations: travel, a test, a trap, a triumph. We can see ourselves in each of these situations at different times of our lives. In various books, you can find the most archetypical story arcs with the archetypical protagonist, antagonist, and companions. In more complex stories the roles are mixed.

One of the simplest formula for storytelling is the Pixar Pitch:

Now we can fill in the blanks.

The 7 story archetypes are:

The 12 character archetypes are:

Of cause, there are different subdivisions of archetypes equally valid, for example, the seven gods in the Game of Thrones: the Father, the Mother, the Maiden, the Crone, the Warrior, the Smith, and the Stranger. Each aspect represents one part of life or existence.

Most of our favorite stories follow the same formulas, and the main difference is in the details. The story should be authentic and relatable. Good storytellers show the story rather than tell using very vivid visualization for the ideas they present.

The story as a snapshot

A good story is often a snapshot of a complex social and psychological reality in a given moment. A story has its beginning and its end. The audience is advised not to step out of the storyline, otherwise, they might see the tricks behind the magic.

Adding the information that is not a part of the original story, may remove us from the place of the audience, and transform us into assistants or informed visitors.

We may want to project from our lives to the stories we hear to relate and get motivated. This is fine. It is tempting to project the happy end from the stories back to our life, but you are likely to get disappointed. The real stories often seamless credible than imaginary ones, but then very rare stories deserve to be told.

Our brain is built to deceive us

We should not be surprised that we are so gullible. Nature often disguises some beings as something very different. If the disguise was not so good, animals would not evolve to use it.

Since we are constantly locked in a competition of wits with other people, we are slowly improving in the art of deceit and in the art of critical analysis. Unless the deceit is not dangerous. In this case, we are almost as gullible as babies 2000 years ago.

The human cortex is where meaning is made and our brains are actually pattern and meaning makers. One of the most difficult tasks for that very brain is to distinguish between image and so-called reality.  Our judgment is biased. We need to make split-second decisions to survive, for example when driving. The danger of identifying something harmless as a threat is not as critical as the risk of missing a real threat.

We want to identify with successful people, but we are just the audience. Successful people know very well how demanding their role is and quite often they envy the things we take for granted. Glorious people play their archetypical roles in front of the cameras, but when the cameras are off they are more miserable than the rest of us.

Esher’s success as an artist is attributed to the exploration of the impossible nature of the opposites. We tend to address our own position and accept the existence of the opposite position, but we forget that reality usually has many hues and dimensions. 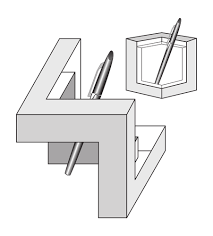