Some women can distinguish four colors. They are called tetrachromats. What does it feel like to see colors others do not see? How can we make our world richer? Some more stuff here and here.

Nocturnal mammals are monochromatic and see 200 colors. Mammals are color blind and have dichromatic vision. They see around 4000 colors and cannot distinguish green from blue.

Primitive creatures already have a vision. Octopuses have huge inquisitive eyes. Some crustaceans like mantis shrimp have very good vision. It can actually have 12 receptors. We have 4 (cones for RGB and rods for luminance).  Only having the receptors is not enough. We actually use our brainpower to judge discrepancies between the receptors. Birds can do something similar and have the most amazing color vision.

Mammals lost color vision when they became nocturnal. At night you really need rods to get all photons the eye can get, and a mirror retina to get some more. Tapetum lucidum is such a mirror in the eyes of nocturnal animals. It is a bit less accurate as the photoreceptors get the light from multiple sources, but extremely light sensitive.

Once the dinosaurs died, mammals came out of their caves. Color vision was very useful for finding fruits. Birds used it. Mammals wanted to get some fruits too, so eventually, they developed their own color vision. Not all mammals, but early primates. Now they could spot fruits and lakes from a large distance.

Women are better than men

Vision is carried by X chromosome. Women have two, men have one. Our male color vision is inferior. My wife can find things in the refrigerator I do not even dream of finding. And I have measured my color perception to be perfect. There are tests for that rearranging colors in color tables.

Other men have less than perfect color vision. Their green color receptor is not always in the middle of the range. It can be closer to red or blue. This reduces the resolution of the color wavelength. Normally, we can discriminate up to 4nm where the receptors are far from each other and up to 1nm when the receptors are close to each other. Obviously color blind people do not have sufficient color discrimination.

As women inherit two X chromosomes, they may get two green light detectors at various frequencies. Suddenly they can distinguish colors not just between red and the closest green, blue and the closest green, but also between the two green receptors. For that to happen the receptors need to be pretty far from each other, meaning that the lady is likely to have two colorblind grandparents.

Around 8 percent of Caucasian males and 0.5 percent of Caucasian women are color blind. The relevant kind of anomaly is a Deuteranomaly: malfunctioning green cone (common), at around 4%. This means that around 1 in 10000 women is a tetrachromat: she can distinguish more colors than the rest of us!

Since rods can also be color-sensitive, there are speculations that some men can also be tetrachromats. No such men were conclusively diagnosed.

What do tetrachromats see?

Some languages have many words for tints of green color. Possibly to facilitate tetrachromatic description. Here what it sounds like:

Let’s take mowed grass. Someone who doesn’t have this genetic variation might see bright green, maybe lights or darks in it. I see pinks, reds, oranges, gold in the blades and the tips, and gray-blues and violets and dark greens, browns and emeralds and viridians, limes and many more colors — hundreds of other colors in grass. It’s fascinating and mesmerizing. Snow is very colorful. Just think of many pastel colors. That’s what I see in white snow, like a white opal.

Basically, every trip outdoors turns into a psychedelic experience. Many of tetrachromatic ladies are designers and artists. They have an added advantage we can only wish for. Tetrachromats have a subtler visual taste than most of us and are often chosen to do artistic work. On the other hand, most of the famous artists are men…

If a monkey can spot a fruit on a tree and a waterhole miles away, does better color vision increase the chances of survival? Maybe. Birds have tetrachromatic or pentachromatic vision.

Tetrachromats are very conscientious regarding small skin defects and poor hygiene. This definitely does not make mating easier. Every vein and blemish is visible. It is definitely a “supernatural” vision.

To make things worse, the kids of human tetrachromats are often color-blind. Not exactly a gene you want to pass on.

And I assume that sensory overload is much more real. More inputs mean more processing. Overwhelming colors everywhere… Even black is no more black. A tetrachromat sees midnight blues and violets and turquoises.

I do not know of a famous artist who was a tetrachromat. Most of the artists were men. Some were color blind. The technique required to generate the perfect composition and balance lights and shadows does not benefit from tetrachromacy.

Some birds (notably pigeons) and butterflies have five or more kinds of color receptors in their retinae and are therefore believed to be pentachromats, though psychophysical evidence of functional pentachromacy is lacking.

Theoretically, a pentachromat, assuming the same spectral resolution of 100 intensities for each of five cone cell types and the same cognitive combinatorial capacity, may be capable of distinguishing up to 10 billion colors. Only this has not been proven.

What we know is sensitivity of the birds to variations in plumage colors, which we humans do not see. Also, birds can see some infrared and ultraviolet.

I guess flying high above, birds cannot rely on motion detection, and objects are too small and blurred for accurate outline analysis. The spectral analysis provides the missing cues.

Owls are very sensitive to ultraviolet. One possible advantage of ultraviolet vision is in tracking the prey. The urine and feces of mice are visible in the ultraviolet range, so they stand out against the uniform color of a cultivated field to the eyes of a hunting bird.

Mechanics of color vision in birds

This section is a complete quote from here

Some birds’ eyes have a far higher proportion of cones to rods than human eyes, and their cones are complex. The inner segment contains a colored oil droplet beside the base of the outer segment, which filters light before it can reach the visual pigment. The oil droplets are either clear or are colored by a variety of carotenoids.

In addition to single cones, there are also double cones, consisting of two closely contiguous cells known as the principal and accessory members of the pair. These double cones have also been observed in fish, amphibians, and reptiles. The photoreceptors in the two members may differ. Again, their role is not fully understood, but it seems as though some of the color processing performed in human brains may begin within the photoreceptors themselves in other vertebrates.

The structure of the bird retina is also more complex than the human retina. The fovea, where there is a localized high concentration of cones, may form a lateral stripe instead of a central area. Some birds possess two or more foveae. The fovea is deeper than ours, creating a larger surface area to accommodate a higher number of cones.

Another specialization is suggested by the non-uniform distributions of different colored oil droplets (such as the red quadrant found in the pigeon’s retina). This indicates a degree of complexity that is not present in the human eye. Our sensory experience does not provide a framework for intuitively understanding the role of these specializations.

Will the men become birds?

Some biohackers use strange drops to enhance night vision.

Ce6 is a natural molecule that’s the key to light amplification here — it’s the chemical used to treat night blindness, and it’s also used in some cancer treatments. It can be found in deep-sea fish and also made from algae and other plants. The insulin and DMSO both help the eye absorb the Ce6.

I seriously doubt any real person can create pentachromatic drops. We can however use several cameras and select the camera offering the best color contrast per object.

Multispectral images are still somewhat exotic and expensive. It is often used for aerial photography. In close quarters it may be used with special lamps. For example to see degrading pigments in archeological texts. For aerial photography it facilitates the detection of targets, especially in foggy weather and camouflage colors.

Wouldn’t it be nice to train tetrachromacy! This is not exactly possible, but we can do the next best thing. We can learn to distinguish and name more colors within the 10 mil range we all have.

The procedure is not that complicated. Get a catalog of colors and substances. There are several such catalogs. Place a well known color from the catalog on a white or gray surface. Place an unknown color near it at try to name it. The name should be accurate. A normal catalog can easily have 256 colors. Some have more. Repeat the process. Personally, I trained on acrylic paints from one of the big providers. I used to paint regularly, and I was not very accurate mixing paints. So I bought premanufactured tints and I trained myself to recognize those tints.

Painting clean geometric shapes using various clean colors is a sure way to learn to discriminate between the colors. You can do something similar on the computer using a cheat sheet.  If you do that, make sure to calibrate the screen gamut using the dedicated equipment. 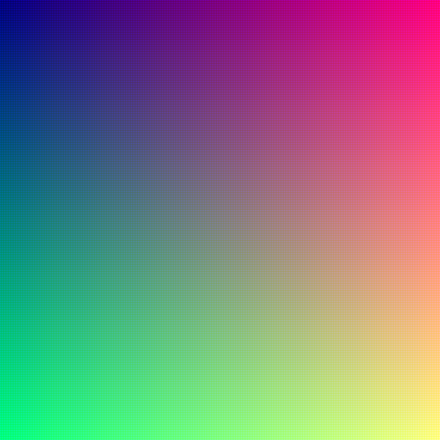